Hoarding corpses and aiming to claim you as their next victim, Coffin Rot spews forth from the bowels of a stale and stagnant crypt to offer up their next full length. Titled A Monument To The Dead, Coffin Rot packs this release full to the bursting point with eight vile, disgusting and ever flesh tearing offerings. You will not get treated to any filler or fluff as what you get from beginning to end is eight pure tracks of bleeding raw, beheading devastation. As one track fades into the ever blackened obscurity, the next bulldozer of death begins, aiming to lower you into the stale earth well before your time should be up. Gutting and maiming, Coffin Rot ushers forth a true mutilating effort here, one that will snap your neck and rip your flesh from bone before all is said and done.

Each of the eight tracks that are present here are as potent and powerful as the next making this to be a true terrorizing and blood boiling offering. Through and through, Coffin Rot has created something here that is menacing, dark, twisted and down right vile. Ever flesh consuming and lobotomizing, they usher forth one cut after the next until you are eviscerated and left as nothing more than a stain of red. With tight, technical skin peeling riffs that are coupled with chest caving drum work and vocals that are incredibly inhuman and entirely monstrous, Coffin Rot claims you as their next victim in their ever growing horde of rotted flesh.

It doesn’t get much more grisly and all consuming as A Monument To The Dead. This release drags you through horrors that you haven’t yet seen all while you are being picked apart and mutilated at the great delight of every track here. Each offering is deranged, horrifying and down right heavy. Not only that, but Coffin Rot has found a formula here that not only is heavy, devastating and brain skewering, but memorable as well. You can try as you might, but A Monument To The Dead will stuck in your head for some time to come like leeches to a diseased carcass.

A Monument To The Dead is potent, powerful, ripping, skewering, eviscerating and so many more descriptors that make this release so great overall. This is a true, bleeding raw death metal record through and through and it is fucking insane. For their debut full length record, Coffin Rot hits the nail right on the head as they produce a record here that is perfect. Eight tracks through and through are all well performed, executed, written, produced and more to treat you to an overall stellar listening experience. It would not be wise to pass this release up as this will be one of the finest death metal releases to come out this year.

A Monument To The Dead will be released October 18 through Blood Harvest and Rotted Life.

Six tracks, three a piece for Coffin Rot and Molder, nothing but devastating and vile death. Coffin Rot and Molder are two of death metal’s most promising acts, and within this split they show exactly why that is. Each band plays a stripped down and raw style of death metal that leaves your veins dry and your head severed. Their sound is fetid and foul and forever relentless as they usher forth a blood letting sound that is sure to rip you to shreds. This split is chaotic, intense and putrid as each band offers up a slab of sickening death that simply cannot be denied.

Leading the charge on this split is Coffin Rot. These death merchants burst through the speakers with their opener Living Cremation. This opener is an intense and wicked offering that is furious and bone crushing to say the least. Coffin Rot rumbles through this two and a half minute track aiming to pulverize you in to nothing more than an unidentifiable blood stain. As Living Cremation ends, Unmarked Shallow Grave begins. With this cut, Coffin Rot continues their rampage offering up yet another grisly and putrid slab of death. With lacerating riffs coupled with ever charging drumming and inhuman growls, Coffin Rot ushers forth a sound that is wholly unforgiving and punishing. Their two original tracks within this split are cranium impaling and flesh eating as each track rumbles along tearing flesh from bone. These are maniacal and nasty cuts of death that leave you bloodied and beaten, only to have you stacked up with the rest of the corpses that they have collected. Coffin Rot’s side of this split is menacing and terrorizing as they present you with nothing but foul disease ridden death. Coffin Rot ends their side of the split with a cover of Cancer’s Hung, Drawn and Quartered, a perfect and violent way to end their split, leaving the rest of the mutilating to Molder.

As mentioned above, the second half of this split belongs to Molder. Condemned to the Catafalque is their opening offering of death that features an even more stripped down, bare bones sound. This opening cut from Molder is a barbaric and savage offering as it charges forth with murderous intent. Condemned to the Catafalque is a miasmal and ever gutting offering that ends near the four minute mark only for it to roll in to the next damning offering titled Skulker. Skulker plays much the same way as Condemned to the Catafalque as it is just as skin shredding and flesh peeling. Each of these two tracks are propelled forth by Molder’s overall stripped down sound that is harsh and punishing all on its own. Molder’s sound features razor sharp riffs that are backed by blasting drumming, bone rattling bass lines and torturous screamed vocals that seem to be howled from beyond the casket. Each of the two original tracks here from Molder are sinister and flesh crawling as they offer up an unrelenting and blood letting sound. Molder rounds the entire split out with an excellent cover of Repulsive Death by Morgue.

This split is something to behold as it features death metal’s two most prominent upcoming bands. Each band brings something different to the table and each band executes their respective tracks so well making this to be an overall well rounded and cohesive offering. Each track here is a barbaric and savage offering leaving your head hanging by just a thread and your entrails drooping out of your skin by the end of it all. This you cannot miss or pass up on if you are a fan of death metal. 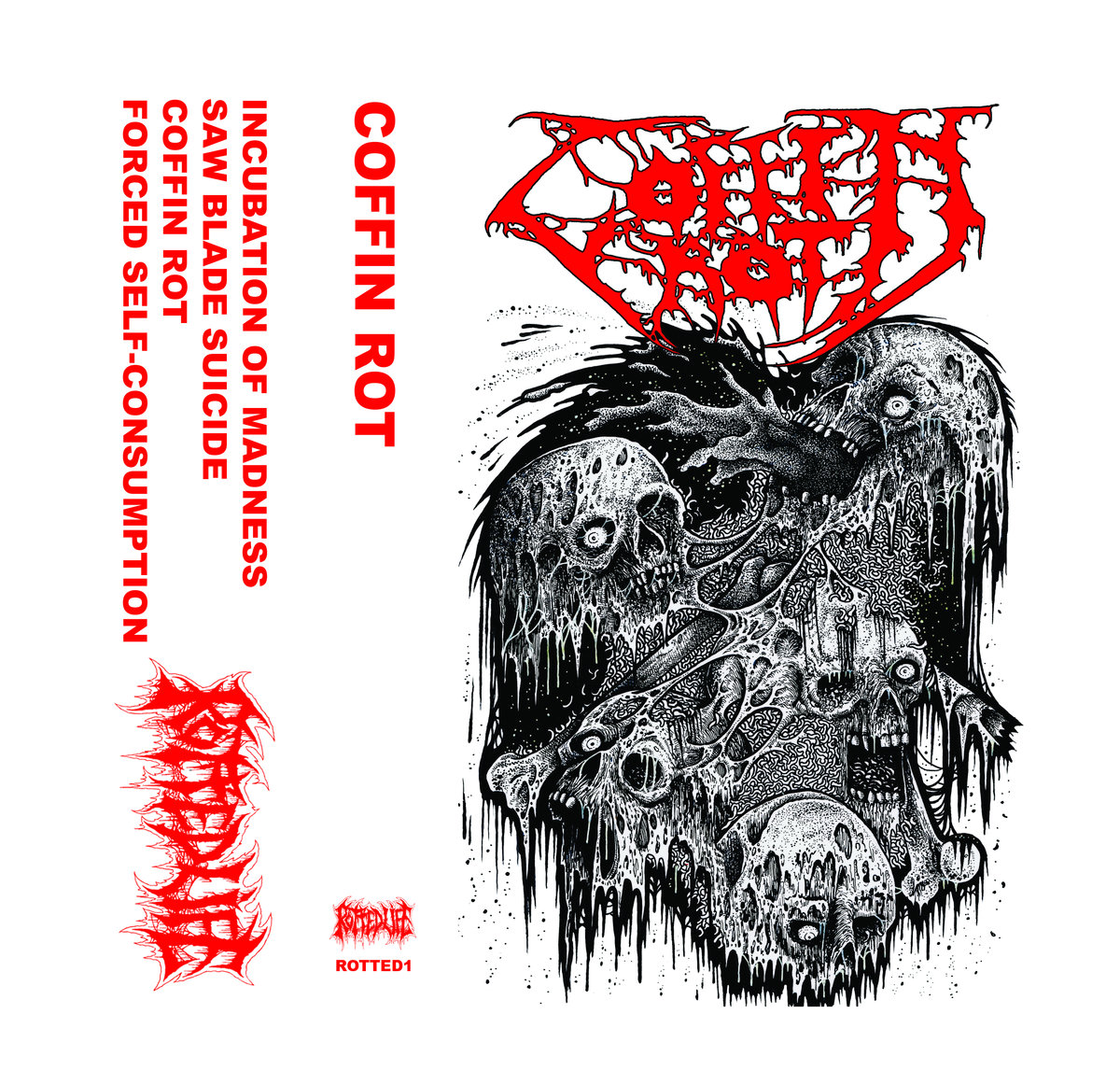 Bursting through their caskets and soon after, your chest, Coffin Rot supply gritty, grime, gore and bile filled offerings that are wonderfully bloodied and rotten. There are four tracks to the self titled release from these Oregonian monsters that are riddled with disease and entrails soaked death that lacerate and mutilate from beginning to end. No frills, no filler, no unwanted anything can be found within this release as you get an unhealthy dose of nothing but putrid stagnant death. Coffin Rot certainly doesn’t wait around too long for you to get comfortable in your tomb as they barrel straight out of your speakers with the opener Incubation of Madness, and from then on you are at their malicious mercy.

From Incubation of Madness on you are greeted with the three remaining tracks that are just as putrid and corpse defiling. Each of the four tracks within this demo have an irresistibly rotten sound. From beginning to end each of the four tracks pour through your speakers like blood spilling over an operating table. The overall sound of this offering is that of the ancient as this demo sounds as though it has been festering for twenty plus years only to grace our gnarled and chewed up ear drums now.

Coffin Rot rip, gnash and shred through your flesh from beginning to end with an unrelenting onslaught of pure death. These gore filled tracks are just as addicting as they are entrails ripping as they lacerate your flesh and pulverize you in to an early grave. Each track is potent as they blast forth ceaselessly to provide you with an ever wicked and vile listen. These perverse offerings of death are very well done and very well executed as Coffin Rot supplies you with some very sinister yet memorable tunes to sever your head from your neck to.

After the drop of the first note Coffin Rot charge forth with malevolence and murderous intent never looking back at who they have claimed as their next victim. This entire demo is done very well as you are greeted with four excellent death metal tunes. This is a great step forth for these crypt dwellers as they have put forth a very solid demo here.